iOS 14 and Privacy: What Marketers Need to Know and How They Need to Prepare

The shift toward more user data privacy (e.g. EU’s GDPR, Chrome killing the cookie in 2022) has been underway for some time with the collective change having massive implications for the marketing industry. It is critical that digital marketers remain abreast of this sustained evolution in order to understand the implications of these changes and plan accordingly.

The most noteworthy change, in large part because of Apple’s reach and influence, may be the rollout of iOS 14. It is a foundational shift for the digital marketing industry, one with short term implications and likely long-term ripple effects that we can’t quite predict. While many of the privacy components were pushed back in this week’s unveiling of iOS 14, that doesn’t alter the fact that winter is coming.

The ecosystem of digital marketing – in oversimplified terms – has been a yin and yang of free, convenient content at the price of user data privacy. While the EU has since decided to legislate with some weight toward user privacy in the form of GDPR and similar efforts, the US has largely left this balancing act to the free market. Until recently, this has left the major hardware and software companies (read: FAANG) that shape our interface with the digital fabric of reality to capitalize and/or protect their own interpretation of what that balance is.

Nowhere has this balance been more of a battleground than perhaps on your mobile device which is constantly capturing and communicating your whereabouts, behavior, and preferences via your unique mobile Apple phone identifier: IDFA (see IDFA breakout box). Back in June, Apple announced their new iOS update in iOS14 will provide one of the more meaningful overhauls to user data privacy of recent years that could affect nearly half of all smartphone users in the US.

What are key points marketers know about the updates in iOS14?

As with any new software release, there are dozens of new features – many of which have significant implications for marketers. But those that demand the most attention center on privacy and transparency for the user – and its impact on advertising monetization.

While it’s hard to predict how users will react, and the actual effect, marketers should expect it to be significant. After all, we know this: As of earlier this year, there had been a 70% decline in always-on location data since the launch of iOS 13. 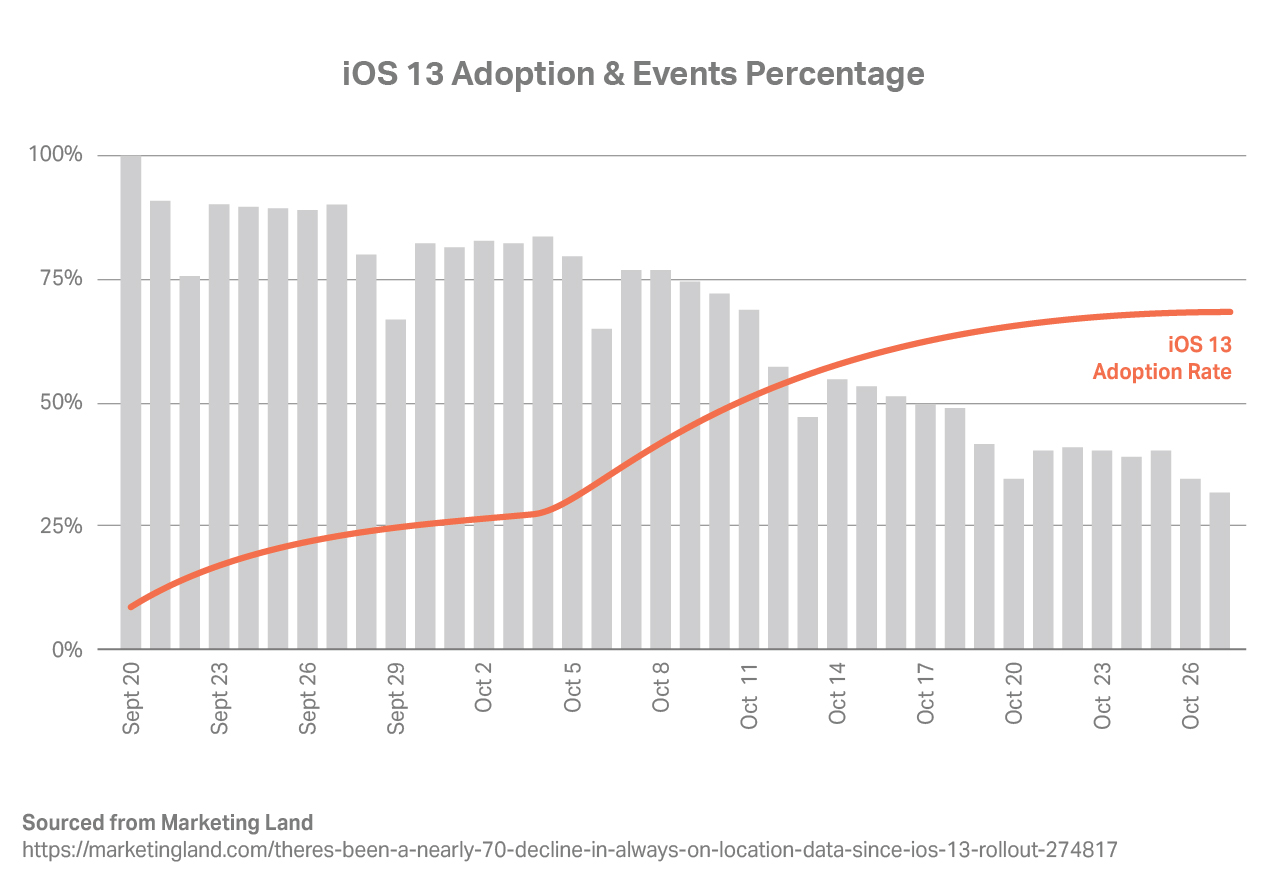 So what are the implications for marketers?

Apple has provided little info about the potential impact of the update – other than a basic overview of the user experience – likely fueling some of the unbridled speculation. But one thing we’re certain is that the biggest impact likely will be on targeted advertising.

If you believe Facebook, the impact could be massive (below). The biggest impact, however, are likely apps and programmatic placements across the mobile web. There will be a decrease in targeting power and control that can lead to inefficiencies.

Because of that, here’s what I expect:

Anything marketers should be doing at this point?

If you rely heavily on social media as a portion of your media mix, I strongly suggest engaging with your measurement and media partners to understand how iOS14 changes affect you. Those who are well prepared, like mobile attribution platform Adjust , will have a comprehensive write-up on what’s changing for them in iOS14. If all you get is shoulder shrugs, you should push harder – as these updates are large enough to cause even Facebook to go public with their whining.

Similar to many of the other major changes in user data privacy, this iOS14 update will continue to emphasize brands prioritize developing their own 1:1 relationship with their consumers and prospects. This has been an area that CTP has been guiding clients towards both as an effective marketing outcome, as well as a hedge for the incoming tide of increased data privacy that makes deterministic targeting at scale increasingly more difficult. The current emphasis on value-add content and personalization will only be magnified as more data privacy changes roll out.

If you’re concerned about these changes, have questions or need some guidance, drop us a line.